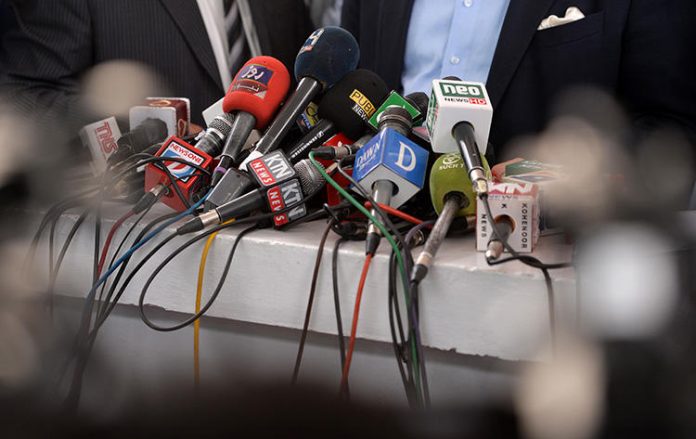 It’s with quiet caution that we welcome the latest bill on the safety of Pakistan’s journalists; which is being prepared as a private member’s bill.

This highlights the trust deficit with the Centre. Especially given the apparent opportunism with which the government previously took up the issue and prepared its own bill back in March last year. Which, frankly, was a bit late in the day for a democratic set-up that insisted the safety of the fourth estate was its absolute priority. Moreover, given that this draft focused overwhelmingly on issues such as contractual security when, just a couple of months previously, five ‘anti-state’ bloggers went missing — underscored the non-seriousness on the PMLN’s part for anything beyond election sloganeering.

The Journalists Safety, Security and Protection Act 2017, drawn up by a parliamentary committee, has some important provisions, such as: a council of representatives comprising journalist bodies, media safety experts and human rights activists. Perhaps most important of all is the inclusion of a special prosecutor empowered to investigate and indict those who commit against journalists. And then there is the not un-small matter of the Journalists Safety Fund. The government is said to be donating an initial Rs 200 million. Though, of course, it can contribute in the long-term by paying its advertising dues on time; thereby helping to liberate all of us who work in this industry from the shackles of bonded labour. Media organisations across the board will also likely make regular contributions to the Fund.

Yet the challenges remain great. Not least in terms of securing the necessary political will to ensure enforcement of the Act. For although the Committee to Project Journalists (CPJ) recorded in 2016 that no media worker in Pakistan had been killed as retribution for his or her work — a first since 2001 — the breathing space is fast shrinking. Indeed, over the last twelve months, intimidation of journalists has skyrocketed. This may involve being ‘picked up’ by plain clothed security officials and warned to stay away from particular beats; to all out abduction and torture. Freelancer Zeenat Shahzadi became the first female journalist to have ‘disappeared’. She was recovered by security forces after two long years.

One of the reasons that Pakistan consistently lags behind in global rankings focusing on media safety is that its ‘assailants’ are both state and non-state actors. That is, from the political parties that in some parts of the country have links to criminal gangs; to the usual security suspects; to the civilian Federal Investigation Agency (FIA) that under its former boss issued directives about what could or couldn’t be said about the armed forces. This is to say nothing about attacks at the hand of certain assets in the pre-reform stage.

Bluntly put, the time has come for the political leadership to stop washing its hands of responsibility for the fourth pillar’s security. Meaning it’s not enough to simply whinge about how the military establishment may or may not be trampling over its writ. The key is to work hand-in-hand with the media to oversee the enforcement of all the recommendations provided by this Act. After all, we, the media, are not enemies of the state: we are an intrinsic part of it.