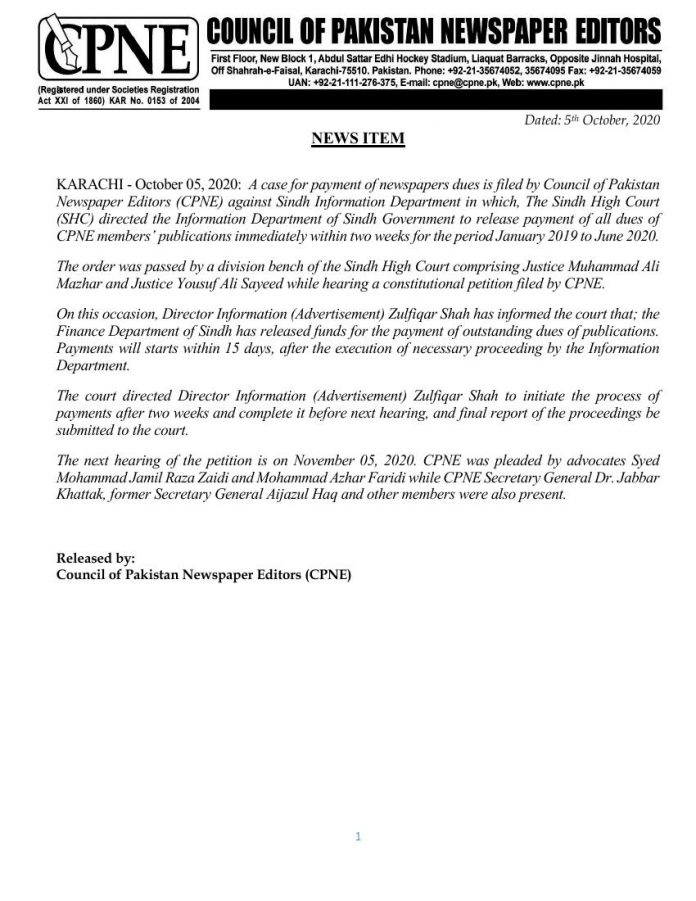 KARACHI – October 05, 2020: A case for payment of newspapers dues is filed by Council of Pakistan Newspaper Editors (CPNE) against Sindh Information Department in which, The Sindh High Court (SHC) directed the Information Department of Sindh Government to release payment of all dues of CPNE members’ publications immediately within two weeks for the period January 2019 to June 2020.

The order was passed by a division bench of the Sindh High Court comprising Justice Muhammad Ali Mazhar and Justice Yousuf Ali Sayeed while hearing a constitutional petition filed by CPNE.

On this occasion, Director Information (Advertisement) Zulfiqar Shah has informed the court that; the Finance Department of Sindh has released funds for the payment of outstanding dues of publications. Payments will starts within 15 days, after the execution of necessary proceeding by the Information Department.

The court directed Director Information (Advertisement) Zulfiqar Shah to initiate the process of payments after two weeks and complete it before next hearing, and final report of the proceedings be submitted to the court.

The next hearing of the petition is on November 05, 2020. CPNE was pleaded by advocates Syed Mohammad Jamil Raza Zaidi and Mohammad Azhar Faridi while CPNE Secretary General Dr. Jabbar Khattak, former Secretary General Aijazul Haq and other members were also present.