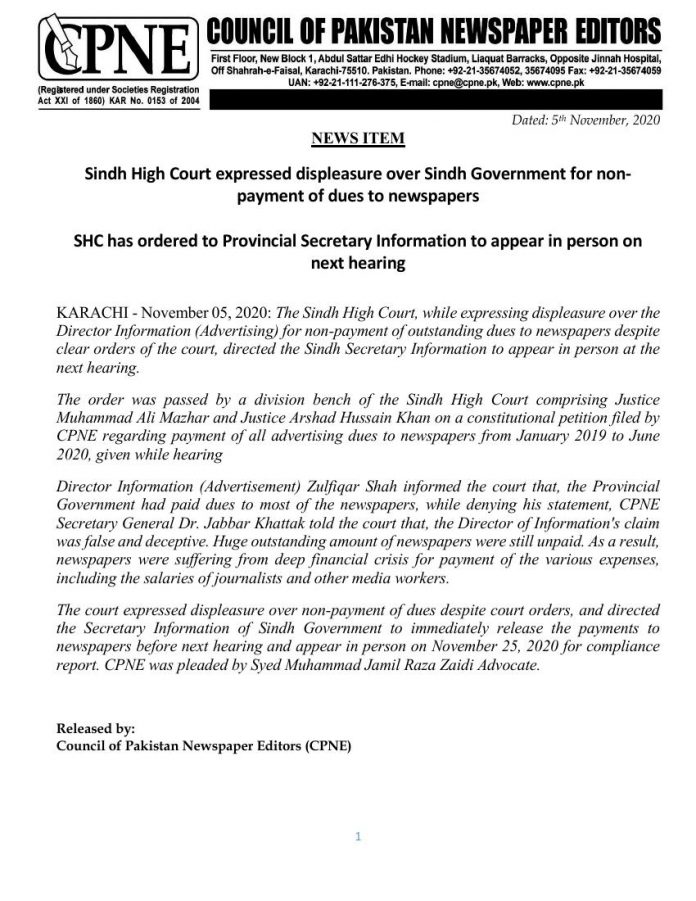 Karachi: The Sindh High Court, while expressing displeasure over the Director Information (Advertising) for non-payment of outstanding dues to newspapers despite clear orders of the court, directed the Sindh Secretary Information to appear in person at the next hearing.
The order was passed by a division bench of the Sindh High Court comprising Justice Muhammad Ali Mazhar and Justice Arshad Hussain Khan on a constitutional petition filed by CPNE regarding payment of all advertising dues to news agencies from January 2019 to June 2020, given while hearing
Director Information (Advertisement) Zulfiqar Shah informed the court that, the Provincial Government had paid dues to most of the newspapers, while denying his statement, CPNE Secretary General Dr. Jabbar Khattak told the court that, the Director of Information’s claim was false and deceptive. Huge outstanding amount of newspapers were still unpaid. As a result, newspapers were suffering from deep financial crisis for payment of the various expenses, including the salaries of journalists and other media workers.
The court expressed displeasure over non-payment of dues despite court orders, and directed the Secretary Information of Sindh Government to immediately release the payments of newspapers and publications before next hearing and appear in person on November 25, 2020 for compliance report. CPNE was pleaded by Syed Muhammad Jamil Raza Zaidi Advocate