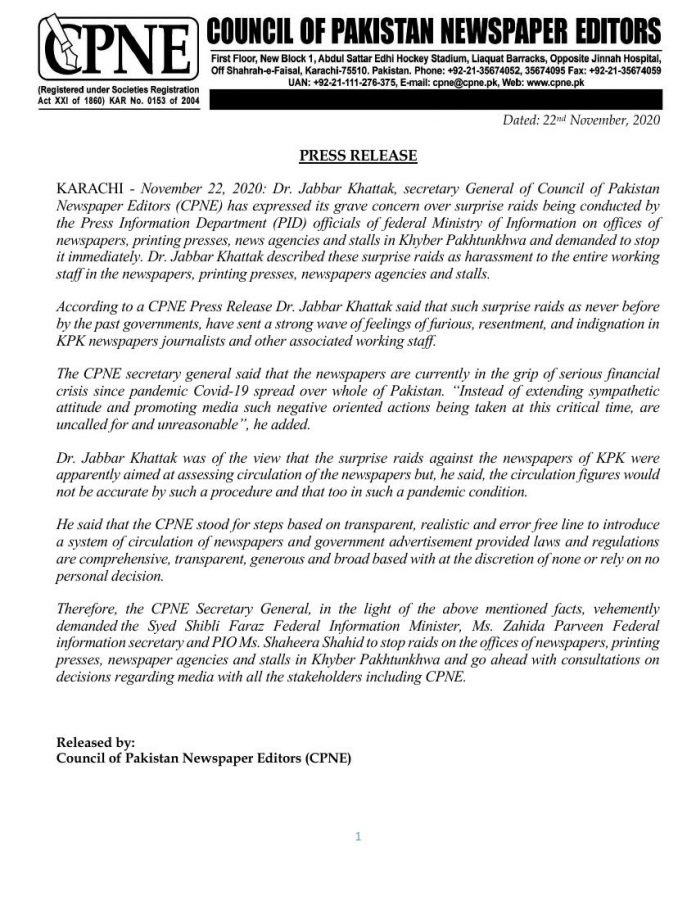 KARACHI – November 22, 2020: Dr. Jabbar Khattak, secretary General of Council of Pakistan Newspaper Editors (CPNE) has expressed its grave concern over surprise raids being conducted by the Press Information Department (PID) officials of Federal Ministry of Information on offices of newspapers, printing presses, newspaper distributors and stalls in Khyber Pakhtunkhwa (KP) and demanded to stop it immediately. Dr. Jabbar Khattak described these surprise raids as harassment to the entire working staff in the newspapers, printing presses, newspaper distributors and stalls.

According to a CPNE Press Release Dr. Jabbar Khattak said that such surprise raids as never before by the past governments, have sent a strong wave of feelings of furious, resentment, and indignation in KPK newspapers journalists and other associated working staff.

The CPNE secretary general said that the newspapers are currently in the grip of serious financial crisis since pandemic Covid-19 spread over whole of Pakistan. “Instead of extending sympathetic attitude and promoting media such negative oriented actions being taken at this critical time, are uncalled for and unreasonable”, he added.

Dr. Jabbar Khattak was of the view that the surprise raids against the newspapers of KPK were apparently aimed at assessing circulation of the newspapers but, he said, the circulation figures would not be accurate by such a procedure and that too in such a pandemic condition.

He said that the CPNE stood for steps based on transparent, realistic and error free line to introduce a system of circulation of newspapers and government advertisement provided laws and regulations are comprehensive, transparent, generous and broad based with at the discretion of none or rely on no personal decision.

Therefore, the CPNE Secretary General, in the light of the above mentioned facts, vehemently demanded the Syed Shibli Faraz Federal Information Minister, Ms. Zahida Parveen Federal information secretary and PIO Ms. Shaheera Shahid to stop raids on the offices of newspapers, printing presses, newspaper distributors and stalls in Khyber Pakhtunkhwa and go ahead with consultations on decisions regarding media with all the stakeholders including CPNE.