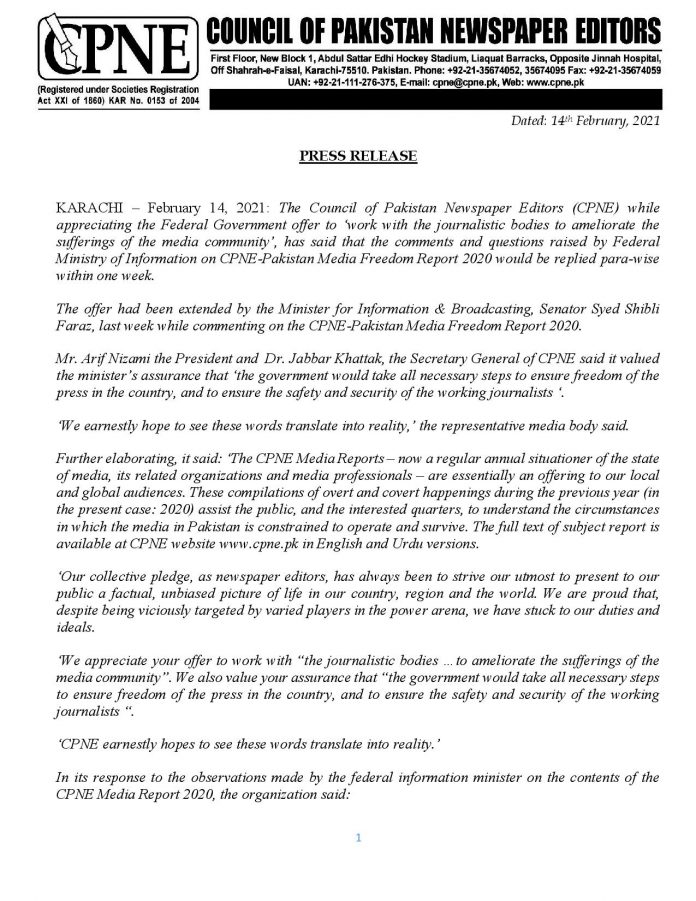 KARACHI – February 14, 2021: The Council of Pakistan Newspaper Editors (CPNE) while appreciating the Federal Government offer to ‘work with the journalistic bodies to ameliorate the sufferings of the media community’, has said that the comments and questions raised by Federal Ministry of Information on CPNE-Pakistan Media Freedom Report 2020 would be replied para-wise within one week.

The offer had been extended by the Minister for Information & Broadcasting, Senator Syed Shibli Faraz, last week while commenting on the CPNE-Pakistan Media Freedom Report 2020.

Mr. Arif Nizami the President and Dr. Jabbar Khattak, the Secretary General of CPNE said it valued the minister’s assurance that ‘the government would take all necessary steps to ensure freedom of the press in the country, and to ensure the safety and security of the working journalists ‘.

‘We earnestly hope to see these words translate into reality,’ the representative media body said.

Further elaborating, it said: ‘The CPNE Media Reports – now a regular annual situationer of the state of media, its related organizations and media professionals – are essentially an offering to our local and global audiences. These compilations of overt and covert happenings during the previous year (in the present case: 2020) assist the public, and the interested quarters, to understand the circumstances in which the media in Pakistan is constrained to operate and survive. The full text of subject report is available at CPNE website www.cpne.pk in English and Urdu versions.

‘Our collective pledge, as newspaper editors, has always been to strive our utmost to present to our public a factual, unbiased picture of life in our country, region and the world. We are proud that, despite being viciously targeted by varied players in the power arena, we have stuck to our duties and ideals.

‘We appreciate your offer to work with “the journalistic bodies …to ameliorate the sufferings of the media community”. We also value your assurance that “the government would take all necessary steps to ensure freedom of the press in the country, and to ensure the safety and security of the working journalists “.

‘CPNE earnestly hopes to see these words translate into reality.’

In its response to the observations made by the federal information minister on the contents of the CPNE Media Report 2020, the organization said:

‘It is unfortunate that the minister chose to deny the existence of portions in the report (from page 7 to page 14) containing details of the journalists who were either murdered or targeted. As a refresher, these details are reproduced below.

‘Furthermore, his assertion that we did not say “whether the journalists were targeted by the law & order agencies or otherwise” is a bit asking too much. Under the law of the land, it is the investigation wings of the government that perform the task to expose and bring in the culprits.

‘CPNE, however, would prefer to believe the minister’s commitment to “ensure that justice is delivered to the bereaved families, and …no crime against journalists will go unpunished”.

‘CPNE would also appreciate the fulfillment of the senator-minister’s announcement that his “ministry will provide financial assistance” to the families of all the journalists who died because of the covid-19 pandemic.’