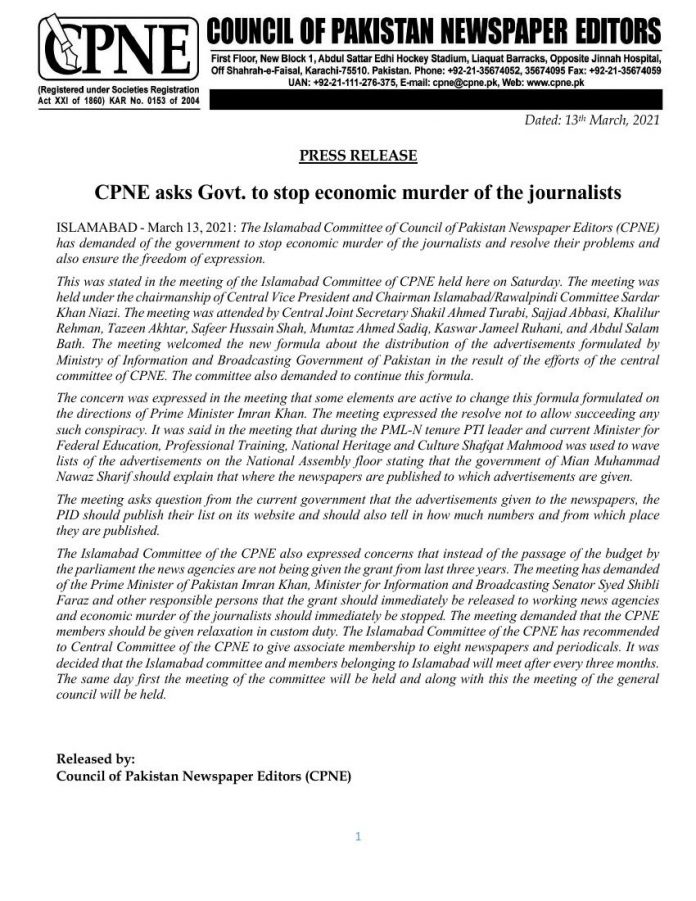 CPNE asks Govt. to stop economic murder of the journalists

ISLAMABAD – March 13, 2021: The Islamabad Committee of Council of Pakistan Newspaper Editors (CPNE) has demanded of the government to stop economic murder of the journalists and resolve their problems and also ensure the freedom of expression.

This was stated in the meeting of the Islamabad Committee of CPNE held here on Saturday. The meeting was held under the chairmanship of Central Vice President and Chairman Islamabad/Rawalpindi Committee Sardar Khan Niazi. The meeting was attended by Central Joint Secretary Shakil Ahmed Turabi, Sajjad Abbasi, Khalilur Rehman, Tazeen Akhtar, Safeer Hussain Shah, Mumtaz Ahmed Sadiq, Kaswar Jameel Ruhani, and Abdul Salam Bath. The meeting welcomed the new formula about the distribution of the advertisements formulated by Ministry of Information and Broadcasting Government of Pakistan in the result of the efforts of the central committee of CPNE. The committee also demanded to continue this formula.
The concern was expressed in the meeting that some elements are active to change this formula formulated on the directions of Prime Minister Imran Khan. The meeting expressed the resolve not to allow succeeding any such conspiracy. It was said in the meeting that during the PML-N tenure PTI leader and current Minister for Federal Education, Professional Training, National Heritage and Culture Shafqat Mahmood was used to wave lists of the advertisements on the National Assembly floor stating that the government of Mian Muhammad Nawaz Sharif should explain that where the newspapers are published to which advertisements are given.

The meeting asks question from the current government that the advertisements given to the newspapers, the PID should publish their list on its website and should also tell in how much numbers and from which place they are published.

The Islamabad Committee of the CPNE also expressed concerns that instead of the passage of the budget by the parliament the news agencies are not being given the grant from last three years. The meeting has demanded of the Prime Minister of Pakistan Imran Khan, Minister for Information and Broadcasting Senator Syed Shibli Faraz and other responsible persons that the grant should immediately be released to working news agencies and economic murder of the journalists should immediately be stopped. The meeting demanded that the CPNE members should be given relaxation in custom duty. The Islamabad Committee of the CPNE has recommended to Central Committee of the CPNE to give associate membership to eight newspapers and periodicals. It was decided that the Islamabad committee and members belonging to Islamabad will meet after every three months. The same day first the meeting of the committee will be held and along with this the meeting of the general council will be held.