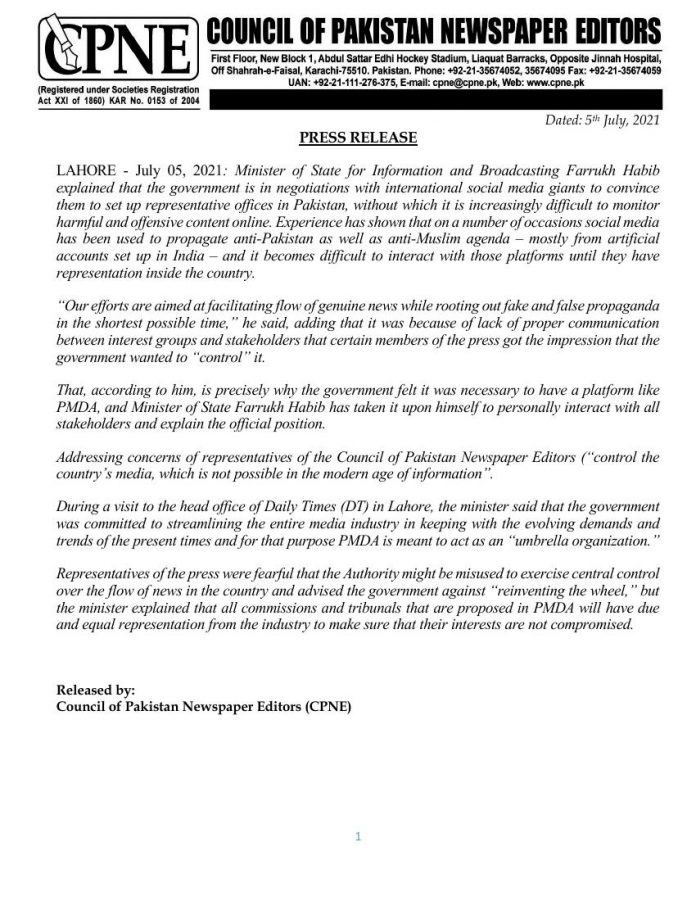 LAHORE – July 05, 2021: Minister of State for Information and Broadcasting Farrukh Habib explained that the government is in negotiations with international social media giants to convince them to set up representative offices in Pakistan, without which it is increasingly difficult to monitor harmful and offensive content online. Experience has shown that on a number of occasions social media has been used to propagate anti-Pakistan as well as anti-Muslim agenda – mostly from artificial accounts set up in India – and it becomes difficult to interact with those platforms until they have representation inside the country.

“Our efforts are aimed at facilitating the flow of genuine news while rooting out fake and false propaganda in the shortest possible time,” he said, adding that it was because of lack of proper communication between interest groups and stakeholders that certain members of the press got the impression that the government wanted to “control” it.

That, according to him, is precisely why the government felt it was necessary to have a platform like PMDA, and Minister of State Farrukh Habib has taken it upon himself to personally interact with all stakeholders and explain the official position.

Addressing concerns of representatives of the Council of Pakistan Newspaper Editors (“control the country’s media, which is not possible in the modern age of information”.

During a visit to the head office of Daily Times (DT) in Lahore, the minister said that the government was committed to streamlining the entire media industry in keeping with the evolving demands and trends of the present times and for that purpose PMDA is meant to act as an “umbrella organization.”

Representatives of the press were fearful that the Authority might be misused to exercise central control over the flow of news in the country and advised the government against “reinventing the wheel,” but the minister explained that all commissions and tribunals that are proposed in PMDA will have due and equal representation from the industry to make sure that their interests are not compromised.