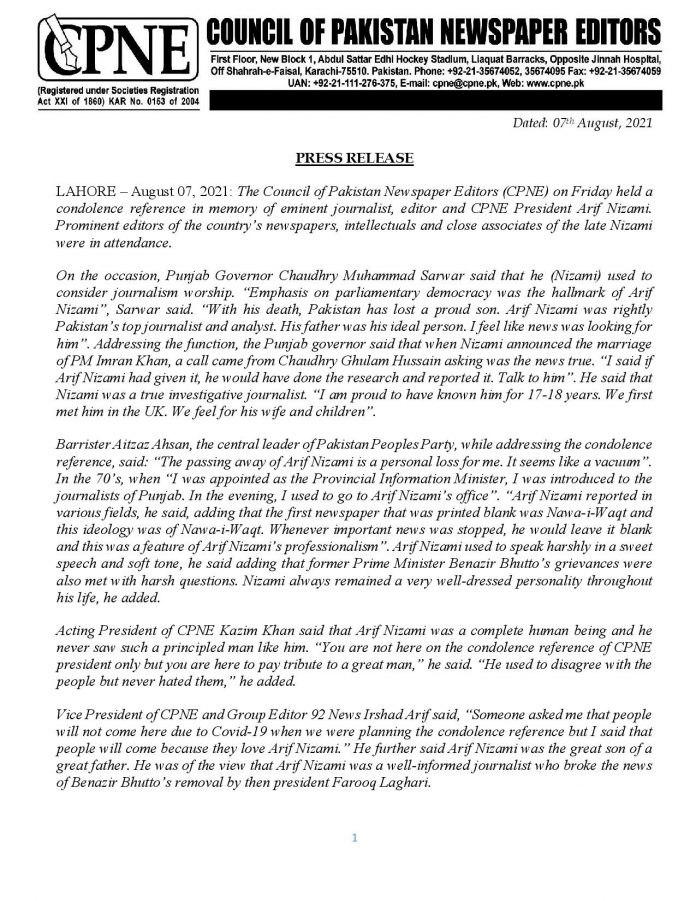 LAHORE – August 07, 2021: The Council of Pakistan Newspaper Editors (CPNE) on Friday held a condolence reference in memory of eminent journalist, editor and CPNE President Arif Nizami. Prominent editors of the country’s newspapers, intellectuals and close associates of the late Nizami were in attendance.

On the occasion, Punjab Governor Chaudhry Muhammad Sarwar said that he (Nizami) used to consider journalism worship. “Emphasis on parliamentary democracy was the hallmark of Arif Nizami”, Sarwar said. “With his death, Pakistan has lost a proud son. Arif Nizami was rightly Pakistan’s top journalist and analyst. His father was his ideal person. I feel like news was looking for him”. Addressing the function, the Punjab governor said that when Nizami announced the marriage of PM Imran Khan, a call came from Chaudhry Ghulam Hussain asking was the news true. “I said if Arif Nizami had given it, he would have done the research and reported it. Talk to him”. He said that Nizami was a true investigative journalist. “I am proud to have known him for 17-18 years. We first met him in the UK. We feel for his wife and children”.

Barrister Aitzaz Ahsan, the central leader of Pakistan Peoples Party, while addressing the condolence reference, said: “The passing away of Arif Nizami is a personal loss for me. It seems like a vacuum”. In the 70’s, when “I was appointed as the Provincial Information Minister, I was introduced to the journalists of Punjab. In the evening, I used to go to Arif Nizami’s office”. “Arif Nizami reported in various fields, he said, adding that the first newspaper that was printed blank was Nawa-i-Waqt and this ideology was of Nawa-i-Waqt. Whenever important news was stopped, he would leave it blank and this was a feature of Arif Nizami’s professionalism”. Arif Nizami used to speak harshly in a sweet speech and soft tone, he said adding that former Prime Minister Benazir Bhutto’s grievances were also met with harsh questions. Nizami always remained a very well-dressed personality throughout his life, he added.

Acting President of CPNE Kazim Khan said that Arif Nizami was a complete human being and he never saw such a principled man like him. “You are not here on the condolence reference of CPNE president only but you are here to pay tribute to a great man,” he said. “He used to disagree with the people but never hated them,” he added.

Vice President of CPNE and Group Editor 92 News Irshad Arif said, “Someone asked me that people will not come here due to Covid-19 when we were planning the condolence reference but I said that people will come because they love Arif Nizami.” He further said Arif Nizami was the great son of a great father. He was of the view that Arif Nizami was a well-informed journalist who broke the news of Benazir Bhutto’s removal by then president Farooq Laghari.

Group Editor Express Media Group Ayaz Khan said that Arif Nizami was an era that ended with his death. He was of the view that there are very few people who are good at being a reporter, editor, columnist and analyst at the same time, and Arif Nizami had all these abilities.

Senior journalist Mujeeb-ur-Rehman Shami said that Nizami was a great son of a great father but he built his identity based on his ability. “He was an investigative reporter and his ideal was his father. He never let his likes and dislikes affect his journalism. The government should also give a medal to Arif Nizami in recognition of his services and a road should be named after him,” he suggested.

Senior journalist Imtiaz Alam recalled his time spent with Arif Nizami and said that Nizami was a great journalist as well as a great personality. “Arif Nizami had an identity of his own and he built this identity based on his ability,” he said.

Yousuf Nizami, son of Arif Nizami said that he considered himself lucky to have worked with a professional journalist like Arif Nizami for some time. “I learned a lot from my father. I consider it my good fortune that I got the opportunity to work with Arif Nizami,” he said. He was as committed to his family life as he was to his professional life. He considered friends as the capital of life and he taught us that we should be helpful to our friends in every way. He never compromised on his principles. There was a strong personality behind him and that’s my mother.

Haider Amin, President of CPNE Punjab Committee and Editor-in-Chief of Daily 92 News, said that Arif Nizami spent a long time with us, never saw him getting annoyed with anyone. He worked with 92 News for a long time and it’s a saddened that he is not with us today. He was a veteran journalist May Allah raise his rank.

Jamil Athar Qazi, a Senior journalist said that last two or three months were hard for journalism, previously Zia Shahid and now we lost Arif Nizami as well. Arif Nizami’s name became famous through his work, he found him a good man, and he never mentioned the sources of his news. Where would such an owner, editor and journalist be find now? Qazi added. Arif Nizami was a symbol of bravery and courage, now we will continue to look for him.

Dunya Group Editor Salman Ghani said that Arif Nizami considered his co-workers not as employees but as his colleagues. He taught us to stand against oppression and tyranny. He had personal relations with the leadership of all political and religious parties in Pakistan, despite not shying away from reporting for or against anyone. Arif Nizami was an encyclopedia of journalism.

Lahore Press Club President Arshad Ansari said that Arif Nizami was a reporter, columnist and editor at the same time. He did a lot of work for CPNE. He understood the pain of the workers, such people are born in centuries, and he was a man who respected the workers.

At the end of the program, prayers were offered for the late Mr. Arif Nizami.