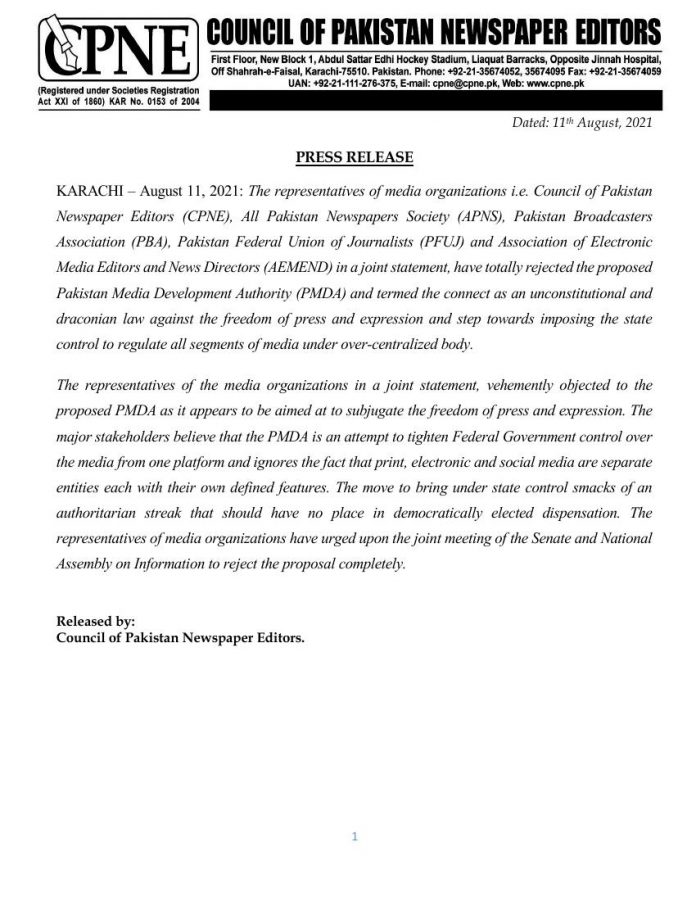 KARACHI – August 11, 2021: The representatives of media organizations i.e. Council of Pakistan Newspaper Editors (CPNE), All Pakistan Newspapers Society (APNS), Pakistan Broadcasters Association (PBA), Pakistan Federal Union of Journalists (PFUJ) and Association of Electronic Media Editors and News Directors (AEMEND) in a joint statement, have totally rejected the proposed Pakistan Media Development Authority (PMDA) and termed the connect as an unconstitutional and draconian law against the freedom of press and expression and step towards imposing the state control to regulate all segments of media under over-centralized body.

The representatives of the media organizations in a joint statement, vehemently objected to the proposed PMDA as it appears to be aimed at to subjugate the freedom of press and expression. The major stakeholders believe that the PMDA is an attempt to tighten Federal Government control over the media from one platform and ignores the fact that print, electronic and social media are separate entities each with their own defined features. The move to bring under state control smacks of an authoritarian streak that should have no place in democratically elected dispensation. The representatives of media organizations have urged upon the joint meeting of the Senate and National Assembly on Information to reject the proposal completely.