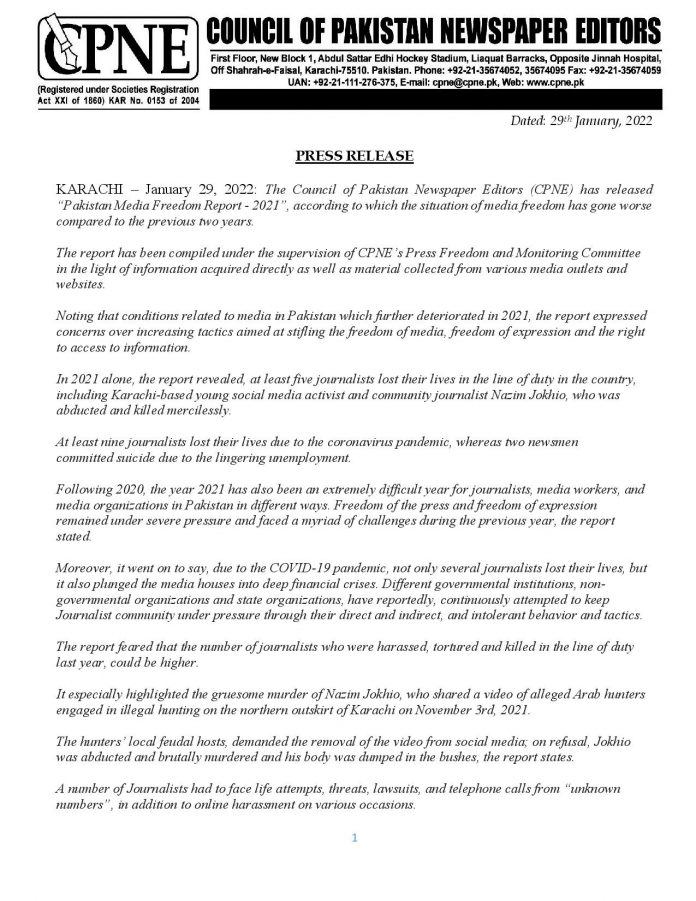 PRESS RELEASE
KARACHI – January 30, 2022: The Council of Pakistan Newspaper Editors (CPNE) has released “Pakistan Media Freedom Report – 2021”, according to which the situation of media freedom has gone worse compared to the previous two years.
The report has been compiled under the supervision of CPNE’s Press Freedom and Monitoring Committee in the light of information acquired directly as well as material collected from various media outlets and websites.
Noting that conditions related to media in Pakistan which further deteriorated in 2021, the report expressed concerns over increasing tactics aimed at stifling the freedom of media, freedom of expression and the right to access to information.
In 2021 alone, the report revealed, five journalists lost their lives in the line of duty in the country, including Karachi-based young social media activist and community journalist Nazim Jokhio, who was abducted and killed mercilessly.
At least nine journalists lost their lives due to the coronavirus pandemic, whereas two newsmen committed suicide due to the lingering unemployment.
Following 2020, the year 2021 has also been an extremely difficult year for journalists, media workers, and media organizations in Pakistan in different ways. Freedom of the press and freedom of expression remained under severe pressure and faced a myriad of challenges during the previous year, the report stated.
Moreover, it went on to say, due to the COVID-19 pandemic, not only several journalists lost their lives, but it also plunged the media houses into deep financial crises. Different governmental institutions, non-governmental organizations and state organizations, have reportedly, continuously attempted to keep Journalist community under pressure through their direct and indirect, and intolerant behavior and tactics.
The report feared that the number of journalists who were harassed, tortured and killed in the line of duty last year, could be higher.
It especially highlighted the gruesome murder of Nazim Jokhio, who shared a video of alleged Arab hunters engaged in illegal hunting on the northern outskirt of Karachi on November 3rd, 2021.
The hunters’ local feudal hosts, demanded the removal of the video from social media; on refusal, Jokhio was abducted and brutally murdered and his body was dumped in the bushes, the report states.
A number of Journalists had to face life attempts, threats, lawsuits, and telephone calls from “unknown numbers”, in addition to online harassment on various occasions.
The family members of the effected journalists were also subjected to physical and mental torture, it added. While performing their assigned tasks, Ajay Lalwani, Abdul Wahid Raseeni, Shahid Zehri, Nazim Jokhio and Mohammad Zada Agarwal lost their lives.
The police and other state institutions, including the Federal Investigation Agency (FIA), registered cases against several journalists during 2021.
In a desire to control media “by hook or by crook”, the government continued to pursue its policy of enforcing the “most” controversial Pakistan Media Development Authority (PDMA) law, taking several shows and hosts off air, getting them expelled from their organizations, and removing a significant number of genuine and authentic newspapers from the state media list.
The simmering financial crisis that Pakistani media houses have been facing is not the outcome of the coronavirus pandemic, rather it was very much there before the novel virus hit the global economies. However, the report acknowledged, the raging pandemic has further aggravated the already deepening financial crisis.
The journalist community, the report warned, are still at a risk of economic collapse due to the ongoing financial constraints.
The crisis that includes, lack of recoveries, unjust distribution of government advertisements, non-payment of dues by the federal and the provincial governments and the private advertisers have led to closure of many newspapers and media outlets, forcing several journalists to commit suicide, and leaving a large number of media works unemployed.
Unfortunately, the report regretted, Pakistan is one of the countries, where violence against journalists is increasing. Journalists are killed brutally and the murderers walk away scot-free. Not even a single murderer has been brought to justice as the country’s justice system has been proven completely ineffective in terms of providing justice and safety to journalists, which is alarming.
According to the report, at least seven journalists were injured in life attempts, four were abducted, two were harassed online, whereas the houses of at least another four journalists were either raided by the police, stormed by attackers or robbers.
During the previous year, the report observed, journalists and media institutions faced censorship and restraint on several occasions. Some 11 journalists were implicated in false cases, jailed. Moreover, Pakistan Electronic Media Regulatory Authority (PEMRA) took several programs off air on seven private TV channels.
Senior journalist and a former Chairman of PEMRA, Absar Alam was shot and injured, journalist and blogger Asad Toor was dragged out of his house and tortured by unknown attackers, anchorperson Gharida Farooqi was targeted through online trolling, while Anchorperson Asma Sherazi was targeted for her critical column at BBC. Anchorperson Muhammad Malik’s show was forcefully stopped after 16 minutes of airing on Hum TV. Senior journalist and anchorperson Nadeem Malik was sent notices by the FIA for his critical reporting, the member of the CPNE’s standing committee, Editor-in-Chief of Jehan Numa Lahore, Waqas Tariq Farooq, and female members of his family suffered harassment and life threats during a robbery at his house.
The Islamabad High Court indicted Editor-in-Chief of Jang group, Mir Shakil-ur-Rehman, senior journalists Ansar Abbasi, and Aamir Ghouri in a contempt of court case for publishing the affidavit of former Chief Judge of Gilgit Baltistan. According to a news report, National Counter Terrorism Authority (NACTA) were blocked around 19,000 social media accounts.
The Pakistan Telecom Authority (PTA) blocked famous social media application, Tik-Tok twice during the year. The PEPMA, time and again, issued notices to several TV channels and suspended license of one TV Channel for their critical reporting of issues relating to inflation, rising price-hike, protests, and increase in petroleum prices.
Declaring the year 2021 as unsafe for media workers. The CPNE hailed the passage of Journalist Protection Bill by the federal government and Sindh protection of Journalists and Media Practitioners Bill. It urged other provinces to follow the suit.