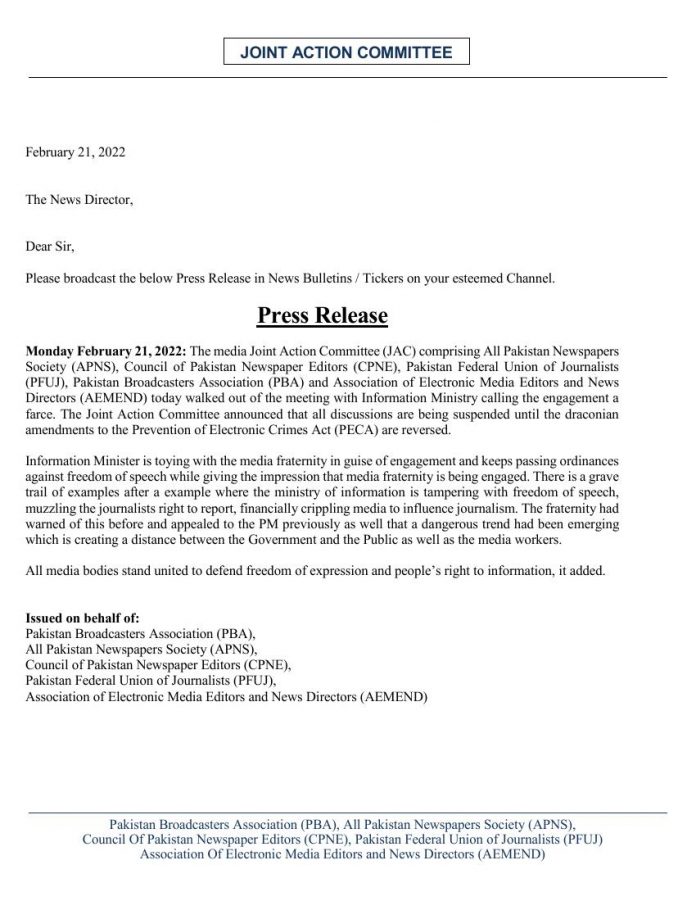 KARACHI – February 21, 2022: The media Joint Action Committee (JAC) comprising All Pakistan Newspapers Society (APNS), Council of Pakistan Newspaper Editors (CPNE), Pakistan Federal Union of Journalists (PFUJ), Pakistan Broadcasters Association (PBA) and Association of Electronic Media Editors and News Directors (AEMEND) today walked out of the meeting with Information Ministry calling the engagement a farce. The Joint Action Committee announced that all discussions are being suspended until the draconian amendments to the Prevention of Electronic Crimes Act (PECA) are reversed.

Information Minister is toying with the media fraternity in guise of engagement and keeps passing ordinances against freedom of speech while giving the impression that media fraternity is being engaged. There is a grave trail of examples after a example where the ministry of information is tampering with freedom of speech, muzzling the journalists right to report, financially crippling media to influence journalism. The fraternity had warned of this before and appealed to the PM previously as well that a dangerous trend had been emerging which is creating a distance between the Government and the Public as well as the media workers.

All media bodies stand united to defend freedom of expression and people’s right to information, it added.