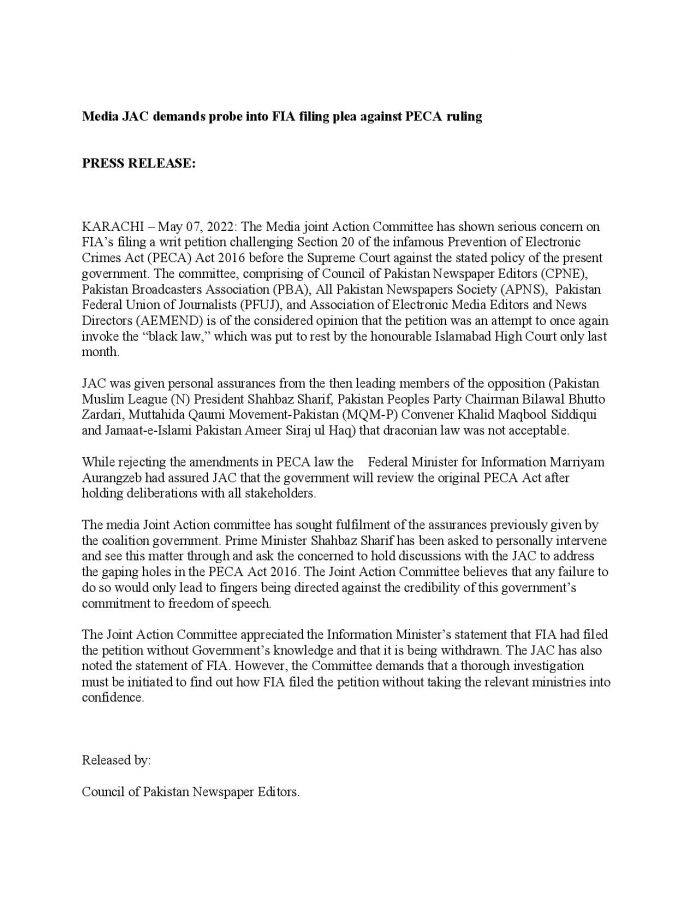 KARACHI – May 07, 2022: The Media joint Action Committee has shown serious concern on FIA’s filing a writ petition challenging Section 20 of the infamous Prevention of Electronic Crimes Act (PECA) Act 2016 before the Supreme Court against the stated policy of the present government. The committee, comprising of Council of Pakistan Newspaper Editors (CPNE), Pakistan Broadcasters Association (PBA), All Pakistan Newspapers Society (APNS), Pakistan Federal Union of Journalists (PFUJ), and Association of Electronic Media Editors and News Directors (AEMEND) is of the considered opinion that the petition was an attempt to once again invoke the “black law,” which was put to rest by the honourable Islamabad High Court only last month.

While rejecting the amendments in PECA law the Federal Minister for Information Marriyam Aurangzeb had assured JAC that the government will review the original PECA Act after holding deliberations with all stakeholders.

The media Joint Action committee has sought fulfilment of the assurances previously given by the coalition government. Prime Minister Shahbaz Sharif has been asked to personally intervene and see this matter through and ask the concerned to hold discussions with the JAC to address the gaping holes in the PECA Act 2016. The Joint Action Committee believes that any failure to do so would only lead to fingers being directed against the credibility of this government’s commitment to freedom of speech.

The Joint Action Committee appreciated the Information Minister’s statement that FIA had filed the petition without Government’s knowledge and that it is being withdrawn. The JAC has also noted the statement of FIA. However, the Committee demands that a thorough investigation must be initiated to find out how FIA filed the petition without taking the relevant ministries into confidence.